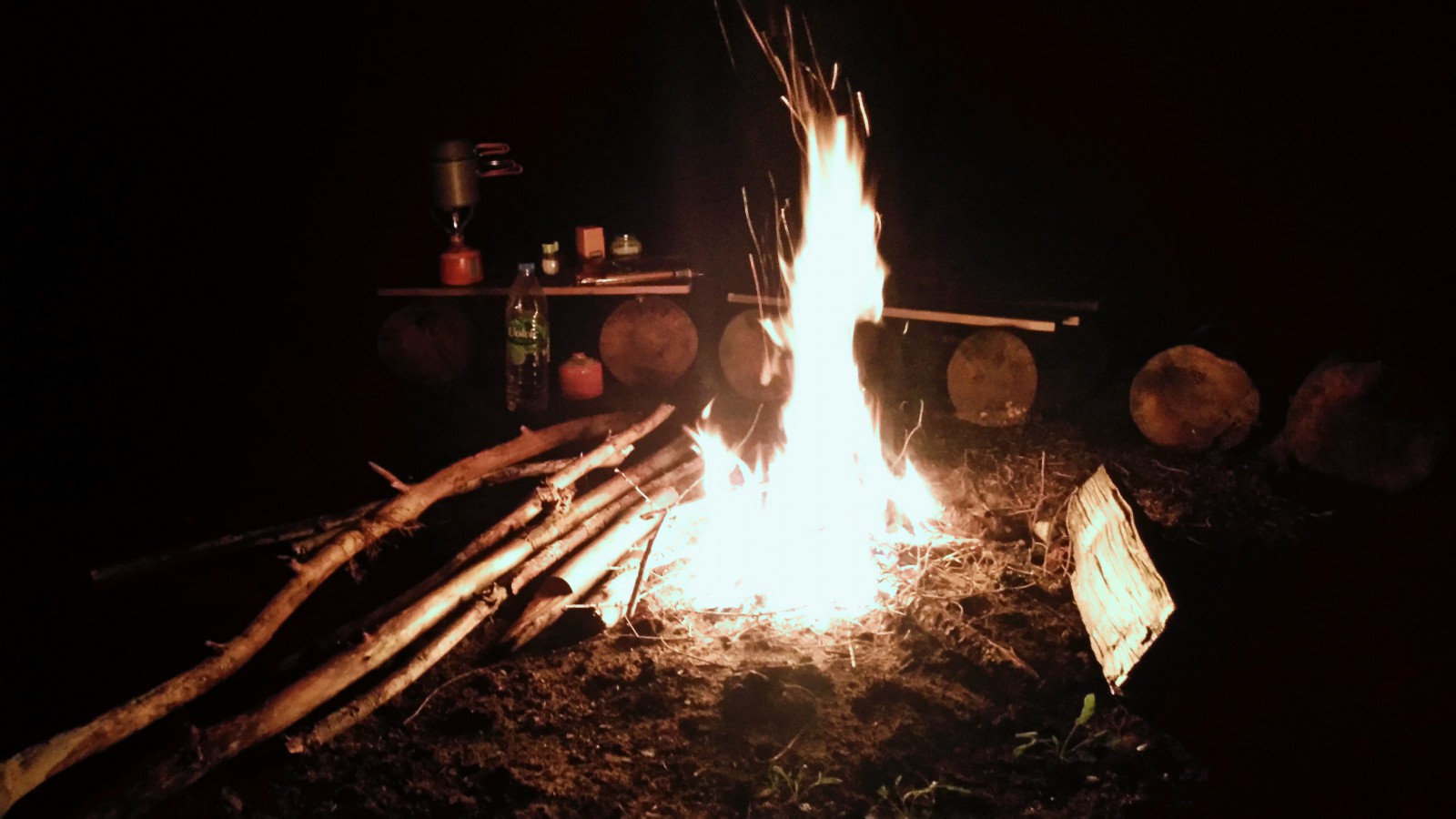 After my long journey I discovered my passion for microadventures. I’m used to do cycle tours around my area, but in the evening I always returned home. One day I thought why not going to work from another place? Why not escaping every day life for a short time? I took my sleeping bag and went on a Sunday into a small forest close by and slept outside on the hilltop. In the night I listened to the sounds from the forest, watched stars and woke up by the rain in the morning, then I cycled alone through the forest and met a group of wild pigs… It felt excited, it felt like an adventure.

Two weeks later I discovered a spot by the river “Spree” where you can go wild camping without getting disturbed. It was directly by the river with campfire spots. Instead of fences or buildings there are fields, forest and sheeps. I was astonished to find some wilderness not far from home. It was a good place to relax. Instead of staying in my room starring on my tablet I was sitting outside and looked into a campfire or up to the stars. From now my panniers were always prepared and I came often to this spot. Sometimes I went from there directly to work. More microadventures followed.

On one trip I started spontaneously Saturday afternoon and cycled to the river “Oder” by the Polish border. Many ways on this route were new to me. There was this old alley of fruit trees, where I stopped constantly to eat mirabelles (tiny plums). When I reached the border mark at “Lebus” I felt like reaching a very far destination. Then I didn’t know where to pitch my tent and I cycled at dusk along the dyke till I found a lonely spot in no man’s land. In the morning I visted the village “Reitwein” and went to the pastor to fill up my drinking water, he was excited about my little trip. After that I came through a forest where I discovered General Shukows command post, who leaded the crucial battle of the Soviets conquering Berlin in the 2nd world war. Then I walked over an open field by pushing my bike and met a group of hikers at the “Priesterschlucht” (priest gorge). When I did my lunch break at the Seelow Hights I was thinking: Wow, I’ve experienced so much and it passed only 23 h when I left home. Once again I was aware how to use the time intensely by traveling bike.

You don’t need much to go on a microadventure. Well, I’ve got a good equipment already. But once a workmate and his girlfriend came with me. They proofed that you can do it quite simple. Her bikes are from a warehouse and they used a cheap pop up tent. They had no panniers or bike basket, just carrying a small backpack and the tent over the shoulder. Instead of mattress and sleeping bag they just had two blankets. And they loved this little trip, we were sitting by the campfire till dawn. Also the three girls I’ve met on my tour on the Flaeming-Skate got my recognition. They started their trip in Berlin with ordinary bikes. Somehow they mounted their luggages on the bike. It was their first bike trip including wild camping. When we cycled together I realized quickly, what they miss on endurance and experience got compensated by a lot of humor.

Those microadventures doesn’t need much planning. In advance I’m looking for a rough route. Where I arrive and where I stay exactly is left open. The unexpected is what makes an adventure. On my trips I noticed tiny huts in the forest. Some of them are looking inviting. On a Sunday afternoon I cycled towards “Eberswalde”. But without my tent, this makes it more exciting. Actual I found some huts. But it turned even better. I found a hidden glade in the forest with a campfire spot. In the night I had the campfire next to me that gave me heat and kept the mozzies away and I looked straight into the sky where I saw a lot of stars (but not as much as in Australia).

“I don’t have time…” is nowadays an common excuse. When I went to elementary school there was no Internet and no smartphones. After school we spent a lot of time outside, looking for hiding places in the bush, planted vegetables, climbed up trees, played cops and robbers… Ok, now you are an adult, you’ve got more liabilities, a work day is longer than a school day. But we still got plenty of time. Trough computer, smartphones and Internet we are loosing this time. When I go on a microadventure, I switch my smartphone to flightmode. So I can still use it for navigation and taking pictures, but I didn’t get distracted. My “biggest” microadventure so far was for 2,5 days where I cycled 235 km and did a short visit to Poland. In comparison to everyday life it felt like an “half-around-the-world-trip”.

When I looked up some new spots for an microadventure I’ve got the idea to sleep on a viewing platform. I found a nice tower in the forest. It’s quite flat around Berlin, getting on a hill and then on a tower offering great views. But to have a good sleep I had to carry my bicycle up to the top. Because I don’t like to leave it behind. On top I saw a stunning sunset and slept just on a bench in my sleeping bag. I could feel the tower moving by the wind, so it was a bit like sleeping on a boat. In the morning I woke up with the sunrise and felt very happy about my little tower adventure.