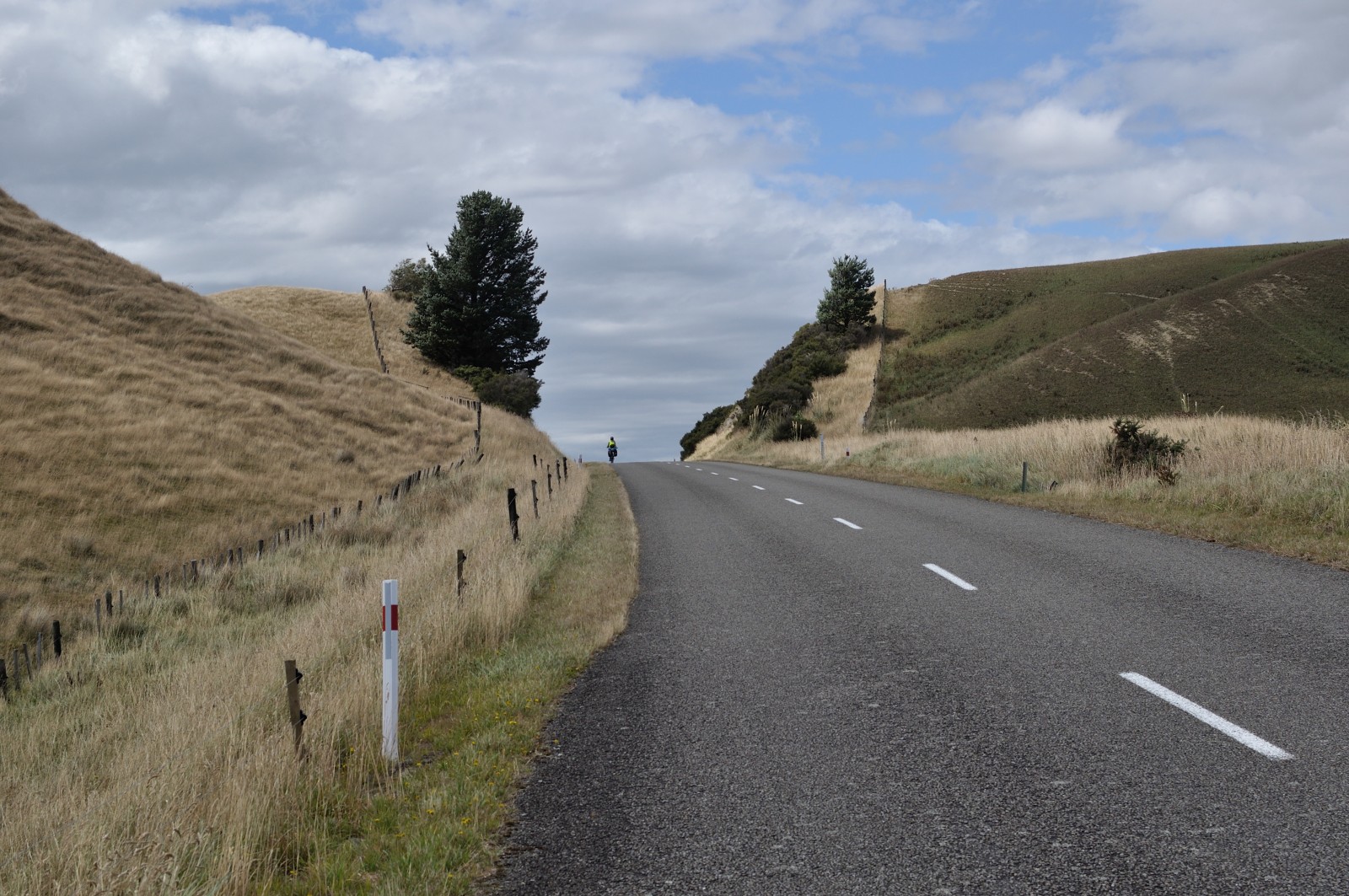 From Wellington to Wairoa

We arrived with the Interislander ferry in Wellington. It was rainy, we decided to skip the center of Wellington and went straight to the northern suburb Petone where we stayed at the Top10 holiday park. It was the beginning of February and we had only one month for the North Island. Yen planed every day so that we arrive in time in Auckland where our plane departures on the 04th March. From Petone we cycled along the Hutt River Trail. We got lot of rain and wind in the morning. Then we joined the Rimutaka Trail. In the beginning of the trail is the Tunnel Recreation a wide space where we camped. The next day we followed the Rimutaka Trail. It’s a beautiful cycle trail, I was amazed. The weather was good and we stopped often to sit down and enjoy the landscape. Rimutaka is Maori and means “sit down”. The trail is an former rail way on the way are many information with facts about the rail way. After the summit the way down was rough with more loose stones, but still ride able only once we had to push to cross a creek. Then we came out at Featherston and camped at the Lake Wairarapa.

The next morning was very windy and we woke up 6 am and saw the sunrise. We had to dismount the tent because the wind was pushing to strong. We start cycling early this day, we cycled 77 km till Masterton and had only a short rest on the way. When we arrived in Masterton we were tired and went to the holiday park, this one has really good facilities (15 $ per person). From Masterton we took the road 52, a quiet back road that leads to the east coast. It was a windy day and we cycled slowly, after 45 km we arrived in Alfredton and stayed there on a free campsite together with a couple of sheeps. In the morning we cleaned our bikes. Sometimes you have to do that, after cleaning the chain and put new oil it pedals smoother. The road became hilly and the climbing made me tired. In Pongaroa we found a spot to camp next to a rugby field, they didn’t locked the showers, so we had a hot shower for free.

From Pongaroa we cycled to Porangahau Beach. We had another sunny day riding along rural farmland. After 45 km we did a break in Wimbledon, there is a swimming pool filled up with cold water. We went swimming, cost only 50 ct (you put in a honest box). After swimming we passed the longest place name in the world, it’s written in Maori. In Poranahau we had ice cream and had a chat with a Maori. Then we went to the beach 6 km far from town. There is a free campsite behind the dunes. It’s a beautiful place. We met Duncan from London who is riding his bike around New Zealand by following the coast line only. He had an interesting story to tell, he rises money for the St John Ambulance. In the night we saw the moon rising at the beach. I can’t remember if I ever saw a moon rise over the sea before. It was beautiful.

The next day was hot and sunny again. The asphalt melted and throw bubbles. It was sticky on the tires. There was no shadow on our way to Waipawa. I was happy about a cold shower at the Waipawa holiday park. From Waipawa we continued on route 52, the way was mostly downhill. After shopping in Havelock North we wanted to go to Clifton. But on the Te Mata Road a cyclist stopped us and told us we can stay at his home. His name is Peter from North Ireland. He works as a doctor in Hastings Hospital and lives in a shared house with two other doctors. They are around the same age as us. Peter is also a bike traveler, he cycled from Istanbul to New Zealand. Yen and me got our own bed, it was the first and only time that we could sleep in a house in New Zealand. It was very comfortable at his home and we stayed two nights. Peter took us up the Te Mata Hills by car. Here we got a great view over Hastings up till Napier and watched the sunset. On the next day all the doctors were at work while Yen and me had the big house for ourselves. Yen made cauliflower pizza for dinner.

We started early at 7:30 am from Havelock. Peter cycled with us to Hastings there was a free breakfast for cyclist. Many people came. After breaky Peter showed us the cycle path to Napier and sayed goodbye to us, he envy us that we can travelling while he has to go to work. Peter is a very friendly person, he even repaired Yen her bike by center her front wheel and fixed her gear shift so she can use the lowest gear. It was a pleasure to meet him. Yen and me went to Napier and had lunch by the sea. We followed the cycle path till Bay View. From there we had to go on the busy Highway 2. Many trucks passed by and there is often no shoulder or just 10 inches. The road became steep and windy, we had to climb on 350 m. I didn’t felt comfortable on this road. However we made it to a beautiful campsite at Lake Tutri which is for free.

It was raining the next morning, we didn’t attempt to leave and stayed in the tent. In the afternoon the weather turns better and Yen suggested to leave and cycle 40 km in the evening when is less traffic. Otherwise we had to do 80 km the next day. We left Lake Tutri around 4 pm and climbed a lot, this road has many steep parts, the traffic was okay. We reached Rauponga at dusk. We didn’t know where to camp, the spot next to the public toilet was the only place with light. We decided to knock on somebody’s door to find a safe place. I asked a Maori if we can camp on his property. He sayed yes straight away. It was dark already when we setup our tent in his garden. Then his wife came out and invited us to come in the house to watch TV together. She was very funny, they are working on a kiwi farm and used to backpackers. She even made dinner for us.

From Rauponga we went to Wairoa, we stand up early at 6:30 am. After a few more hills we could cycle the last 15 km to Wairoa on a flat road. We spent the afternoon in the motor camp and relaxed.