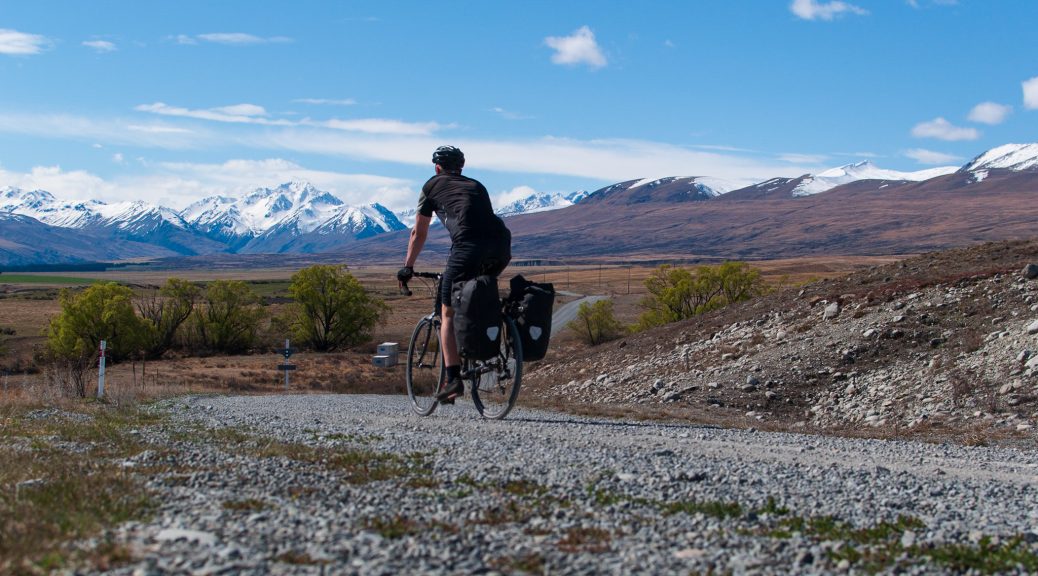 Have you ever heard of biketramping? Most likely not. It’s a word that came up in my head on my recent trip. It describes my new way of traveling: I’m using my bike to reach a backcountry hut as close as possible. At some stage it may happen that I leave my bike and panniers behind and change to a backpack and hiking boots to tramp the rest of the way. I discovered the possibility of biketramping when I rode the Nevis Road in February 2017, a remote backcountry road in Otago. By chance I found an historic hut next to the road where I spent the night. It was my first time in a backcountry hut in New Zealand. After that amazing experience I asked myself where else can I go with my bike (or by feet) and stay in a hut. Other biketramps I have done so far: Packhorse Hut, Black Hill Hut, Benmore Hut, Tarn Hut.

This trip was actually not planned as a biketramp. Originally I wanted to go to Arthurs Pass in my week off and hike from there to Lake Sumner. But the forecast looked pretty wet for this area, also I was wondering how can I carry food for 7 days. It was so heavy when I put everything in the backpack. Better take the bike and put the food in the panniers, was my thought. For my route I chose to cycle from Lake Tekapo to Lake Pukaki and Lake Ohau, the forecast looked very good. Although I’ve been there already in 2014, 2016 and 2017 I haven’t done any tramping in this area. Spring has just begun in the Southern Hemisphere and the time changed to summer time (yeah, daylight until 8 pm). However I had to expect cold nights while I was going into the mountains. On Monday morning the 1st October I took the bus from Christchurch towards Queenstown. At the bus stop I was surprised to see three other bike traveler as well, but all our bikes fitted in the bus. After 4 h we reached Tekapo and I was happy to leave the bus and get on my bike. The weather was splendid and after a lunch break I cycled on Lilybank Rd along Lake Tekapo. It was 40 km (split up into 35 km cycling and 5 km hiking) from Tekapo to Camp Stream Hut, where I intended to stay the night. That shouldn’t take too long was my thought.

But I was strolling, enjoying the views, playing with my camera (which I haven’t used for one and a half year) and headwind came up. By the time I reached the junction to Roundhill Skifield I realized that I still had to climb onto 1200 m for the start of the track and I was only on 700 m altitude. I decided to leave my bike behind right away, because the road got worse and I would be faster by walking. I hide my bike in a ditch, changed my shoes and took my backpack with sleeping bag and food for one night. From a biker I turned into a hiker. The ski season at Roundhill was over, there was no traffic on the road. I enjoyed walking the quiet and breathtaking scenery. It was so convenient leaving the bike behind and being able to walk with less luggage. After a 2 h hike on the road I reached the sign where the track to Camp Stream Hut starts. It was 6 o’clock and another 2 h to the hut. The track was going over a ridge and then descending down to a valley where I followed a river. I saw my first wallaby in NZ (they are no native animals and it is considered as pest). While the sun was going down I was trying to find my way along the river, the markers got rare and the track was overgrown with tussock. Darkness sets in and I haven’t reached the hut, but accordingly to the map I was very close. It was after 8 pm when I was standing in the dark with my head torch on and looking around but couldn’t find the hut by the river. I looked again on my map and realized the contour lines were showing that the hut was not on the same level as the river and when I walked up the hills I finally found the hut on higher ground. What a day, 4 h of bus ride, 3 h of cycling and 4 h of hiking and almost got lost. The hut had 6 bunks and was from 1898. I was alone and light up a fire, surprisingly there was plenty of firewood stacked up even there are no trees around for miles, it must have been dropped by helicopter or fourwheel drive.

The next morning I hiked back to my bike the same way that I came in. When I picked up my bike I did a lunch break, then I cycled to Tekapo and from there towards Lake Pukaki. On Braemar Rd, another long gravel road, I found shelter for the night. A historic telegraph hut was located just next to the road. It was a wee hut without windows. However for one night it was comfortable and I spent the evening studying the hut graffiti which was dated back to the 1920s. In the morning I opened the hut door and could see the sunrise from my bed. The grass was covered in white frost and the puddles were frozen. From a creek close by I got water and made some oats for breakfast. It was the third day of my trip and the weather was still great for early spring. I continued on Braemer Road and went downhill to Lake Pukaki. On my lunch break I took a nap by the lake and it was so nice waking up and realizing I’m not dreaming, I’m in New Zealand and this is real wonderland (for pictures of Lake Pukaki look up my past article).

My today’s destination was Baikie Hut, located in the Ruataniwha Conservation Park. I found the access to the track at SH80 (about 8 km from the junction of SH8). It was a 4WD track and rideable by bike, you can even go by horse, there is a fenced paddock next to the hut. The track leads over a grassy flat and is straightforward. After 2 h on the track I reached the hut next to the Twizel River. There was a bike leaning against the hut that I saw just a couple of days before. It belongs to Hong from Korea. I remember when I met him at the bus stop in Christchurch and the driver asked him to take off his front wheel and he said I don’t know how to do that. Of course I helped him. I admire these people who have zero travel experience by bike and throw themselves into an adventure with just the basic of equipment. He bought a 70 $ bike and mounted somehow all his gear with a rope on his bike. The hut was small and had 4 bunks only and was occupied by three hunters who came back later. So I was the 5th person and was wondering where would I sleep. In my presumption always finding a free bunk I didn’t took any mattress with me. But the hunters helped me out with a mattress. They came with a 4WD and were well equipped. It was a three generation group, grandfather, father and son. They were chasing thar all day and spotted more than 20 animals. However the youngest of the group got too excited and missed shooting them. Later, when the night was clear and the sky was full of stars, the Korean asked me where is the Southern Cross. I pointed it out to him and the Scorpion as well. Then he pointed on more stars and asked which one is Venus and which one Jupiter. Actually I didn’t know, I was never aware that you can see and identify these planets without a telescope! I took out my smartphone and with sky map we located these planets. It’s incredible how bright the Venus is, it looks like somebody installed a massive floodlight in space. We also located Mars and another dozen star signs and of course we could see the milky way. With good reason this area (Aoraki-Mackenzie) is designated as one of the biggest dark-sky reserve in the world.

From Baikie Hut I went to Lake Ohau. I returned to the main road SH8 and cycled down towards Twizel. Before Twizel I turned onto the canal road which leads directly to Lake Ohau and is easy to cycle (if you don’t have headwind). When I saw Mount Ben Ohau I told myself I’m going to hike up there. At Lake Ohau I followed a narrow gravel road for a couple of kilometers until I reached the starting point of the Ben Ohau track. My plan was to stay in a hut directly by the lake. There is a beautiful hut, but it was already occupied with hunters. I found another hut close to the track, it was a derelict with missing door and window, but I had it for myself and inside was a pile of firewood and a thick mattress. There was water supply through a creek close by, I even took a swim there. It was Thursday afternoon and I decided to stay here for two nights, so I could relax the next day. The next day was rainy but I stayed dry in my little shelter and spent the day with preparing lots of soups and reading a book. On Saturday I hiked up to the summit of Ben Hau. It takes about 2,5 h. It was super sunny and the view was just incredible. To reach the true summit on 1522 m I had to leave the track at some point and find my own way for the last 200 m elevation gain (but I knew that before). I spent a little while on top and let my eyes wandering around. I could see all of Lake Ohau, the canal that I rode two days ago on the bike, Twizel, Lake Ruataniwha and even a bit of Lake Pukaki. Epic! After the descend I returned to my bike and cycled to Lake Ruataniwha where I spent my last night of this trip in a cabin on a campsite. On Sunday I took the bus from Twizel back to Christchurch.

PS: I have to admit this week was remarkable, it felt so long and exciting, time was literally slowing down. Looking forward to do more biketramping.