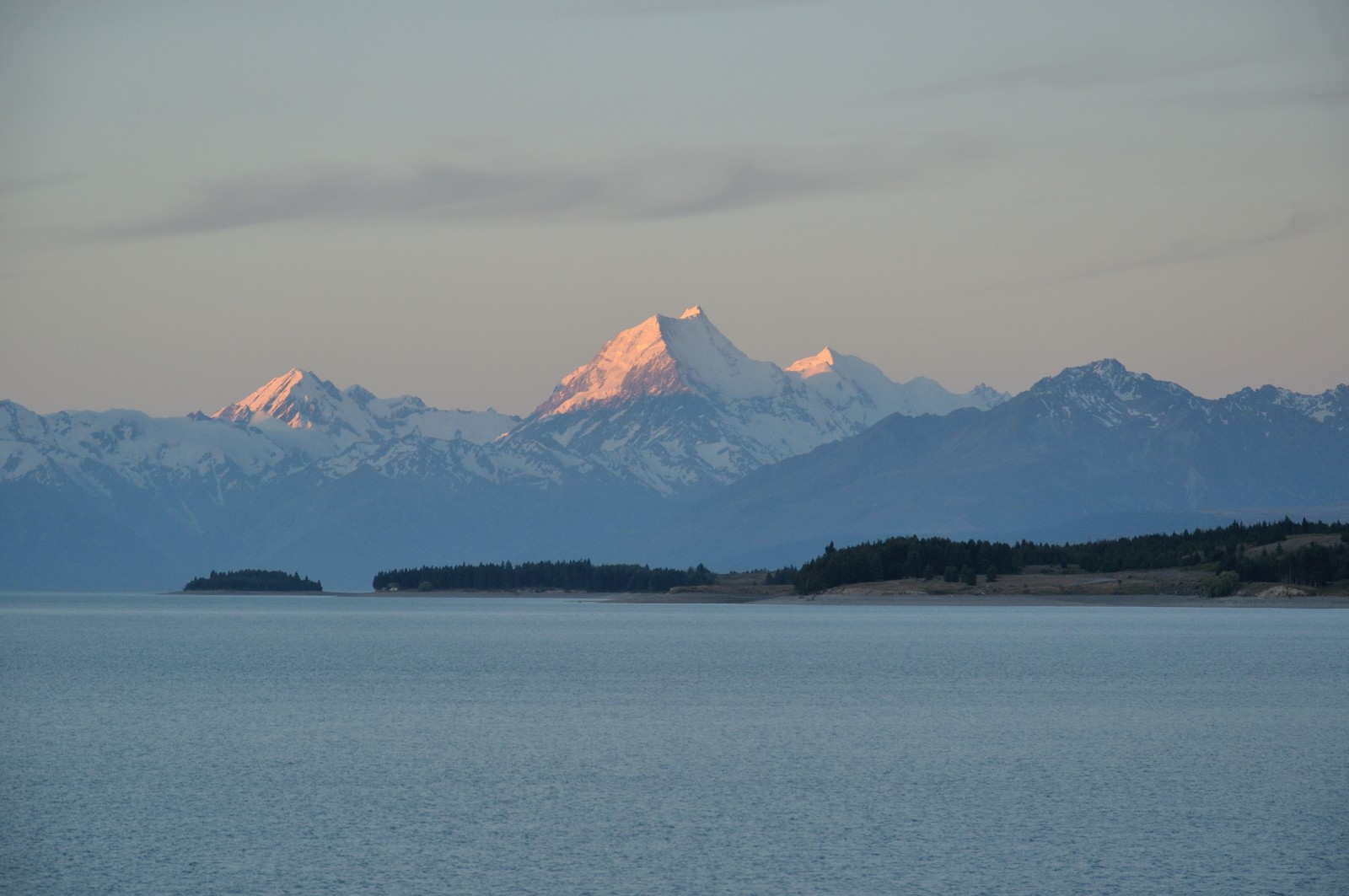 From Christchurch to Omarama

I was full of excitement when I arrived in New Zealand, after almost 2 years in Australia my journey continued (and this time I have a travel buddy with me from the beginning)! At the arrival of Christchurch Airport our bikes and tent got checked for dirt, it was all clean. After answering a few questions about our stay and travel plans for New Zealand we got a three month tourist visa stamp in our passports. The first thing I noticed by coming out of the terminal it was much colder here. Only 15° C in comparison in Queensland we had 30° C. I assembled our bikes, there is a dedicated area in front of the terminal. Then we cycled to New Brighton a suburb of Christchurch by the sea. Here we camped in David’s backyard. We contacted him before on warmshowers.org. He runs a workshop for pushbikes in town, he is specialized in building custom bikes. Originally we wanted to stay two days in Christchurch. But we were tired and not that keen to ride our bikes straight away. So we stayed five days. We bought maps and a book which describes many bike rides in New Zealand. David repaired my bike, he changed the headset and I put new oil in my Rohloff hub. Polly and me went several times to the beach that was just down the road, but we had to wear long clothes because it was still cold. We went to the New Brighton Library, the best library I’ve been, it is cosy inside with a nice view to the sea through big panorama windows, the computers with internet access are free to use.

On Friday the 12th we left Christchurch on this day the sun came out, I was very happy about this, the days before were overcast. We cycled via Colombo Rd and Cashmere Rd out of the city. Then we took the Old Taipu Rd. Next to the road are tall hedges who are all straight cut. We camped in Coes Ford, a free campsite on a large field. We did 56 km. On the next morning Yen wanted to go on the “Little River Trail”. At first I was not agreed because the night before we planed to go towards the mountains. But she changed my mind, we cycled to Little River on a former rail trail. It was beautiful and easy to ride because it was flat and no traffic. We did wild camping at Lake Ellesmere.

The 14.12. was a sunny day, we had a rest in the morning in Little River. Then we turned back to Coes Ford and slept another night there. We left the campsite late, it was 11 am already. At Rolleston we made a stop and had our first shower since we left Christchurch. There is a nice swimming hall. Yen pushed me to go there. We went swimming and got relaxed in a spa, the entry was 5 $ only. After swimming we looted the supermarket, we were very hungry. We like the bread at New World, they making good ciabatta. It was 5:30 pm when we left Rolleston. We didn’t know where to camp tonight. The fields next to the road were surrounded by fences. At the Sylvin River we found access to a flat ground. Under a bridge we discovered a dead opossum, it was tight up on a rope and there was blood on the stones. That was scary, but we were tired to move so we stayed at this place. Yen was not that scared, but I didn’t slept well the night because I kept thinking who put the dead opossum there. The next day we got up early I wanted to leave the place as soon as possible. In Horarata we took breakfast in a park next to a racecourse, we should have come her last night this place is much more pleasant. The road ascent slowly, we reached 400 m altitude. We met another bike traveler, Jens from Holland. He caught up to us. We made an appointment for playing cards at Rakaia Gorge. Our idea was to play cards cards with other travelers but we realized it only once. The Rakaia Gorge is a beautiful place with an nice camping place next to the river. At the campground we met Jens and another bike traveler his name is Andy. We played shithead together. The following day we had a rest day at Rakaia Gorge, the campground cost 7,50 $ per night including warm shower.

The day after the rest day started with a steep climb from 300m to 500m. After the road was straight, we stopped at a cafe and had our first ice cream in New Zealand. The brand was TipTop and we got addicted to this ice cream. In Arundel we found a free campsite and stayed there the night. We even made a fire, it was good so we could stay outside otherwise it would be to cold. The next day we came through Geraldine, a lovely town. We cycled till Pleasant Point. Here we stayed on a campground. In the evening we saw a Christmas Parade going through Pleasant Point. Many people dressed up, it was funny. Before we left Pleasant Point we tried to fix the front wheel of Yen’s bike. It’s wobbling, the wheel has to be center. After the bike maintenance it was afternoon already but we still cycled 60 km till Lake Opuha, where we arrived at 8:30 pm, fortunately sunset is after 9 pm. So we could setup our tent in daylight. There is a free campsite by the lake. You got nice mountain views, I like this place. We met a German couple from Hamburg at the campsite and had dinner together. The next day we had a rest day by the lake, it was rainy. I had to fix Yen’s tyre, she got her first flat tyre.

After the rainy rest day in the tent we had a sunny day. It was a good day for cycling, we took back roads to the State Highway 8, we had to cross a ford. On the Highway was lot of traffic, but still okay in compare to Bruce Highway in Australia. We ascent from 400m over 700m via Burkes Pass. Yen did well, she had to push only a few hundred meter. After the pass we got spectacular views to high mountains with snow on top. It was a great feeling to cycle towards those mountains. We arrived in Lake Tekapo and stayed in a Holiday Park for 15 $ per person. It’s a beautiful place with view on the Lake Tekapo with his greyblue glacier water. Many tourists coming here. We stayed over Christmas here and had perfect weather. We had to find new tires for Yen’s bike because their profile was gone. There is no bike shop in Tekapo but at a garage somebody helped us, a friendly guy asked his neighbor and came back with two almost new tyres and Yen gave him 20 $ for beer, because he didn’t expect any money from us. We hiked on Mt John, the summit is on 1000 m and we had a wonderful view.

On 25th December we left Lake Tekapo and cycled to Lake Pukaki. After 15 km on the Highway we took the Canal Rd, we didn’t saw cars on this road for long time, because it’s a service road. As we were looking At Lake Pukaki for a place to do wild camping we met a German couple on pushbikes, Michael and Gergana from Magdeburg. We were looking together for a place to pitch our tents and found a gorgeous spot right by the lake with view to Mt Cook, the highest mountain of New Zealand. It was exciting for me to meet Michael and Gergana they started their trip in 2013 and cycled a similar route from Germany towards east. We made pancakes the next morning and enjoyed the view to Mt Cook. Yen and me stayed till lunch at Lake Pukaki while Michael and Gergana left earlier. From Lake Pukaki we followed the Alps2Ocean cycle trail. The trail goes on gravel paths without cars but many other push bikers using this trail on an guided tour. We made a stop in Twizel to buy food, it got late. It was 6 pm and still 30 km to Lake Ohau our daily destination. The wind became stronger and we had to get of our bikes and push. Dusk was approaching and we were still struggling with the wind and to find a sheltered place, also we got lost and took a wrong way. But we found back to the right path and found some bushes as well where we camped.

It was still windy on the next morning but not that strong as the day before. We cycled to Middleton and returned on a sealed road for a few kilometers. Then we followed the Alps2Ocean trail. It was a small gravel path, we had a long climb from 500m to 900m. The view was great. Yen did well with her new tyres they are bigger then my and she got my grip on this rocky path. After the highest point it was all the way downhill to Omarama. Four kilometer before Omarama is a free camping area next to the cycle path. People stay longer here in huge tents or motorhomes. We stayed one night and went to Omarama on the next morning where we went to a holiday park to have shower and a rest day. We enjoyed a side trip to Clay Cliffs. We walked around the cliffs, it’s a beautiful and peaceful place with a wide view over the valley. On the the way back to the holiday park Yen got a flat tyre, luckily I took my repair kit with me and changed her tube. It was around 10 pm when we returned to Omarama. After this little adventure we decided to have one more rest day. Th next day we stayed all day in a hidden picnic area and watched gliders in the sky. In the evening we went to the free campsite where we’ve been two days before. After Omarama we want to head to the West Coast.