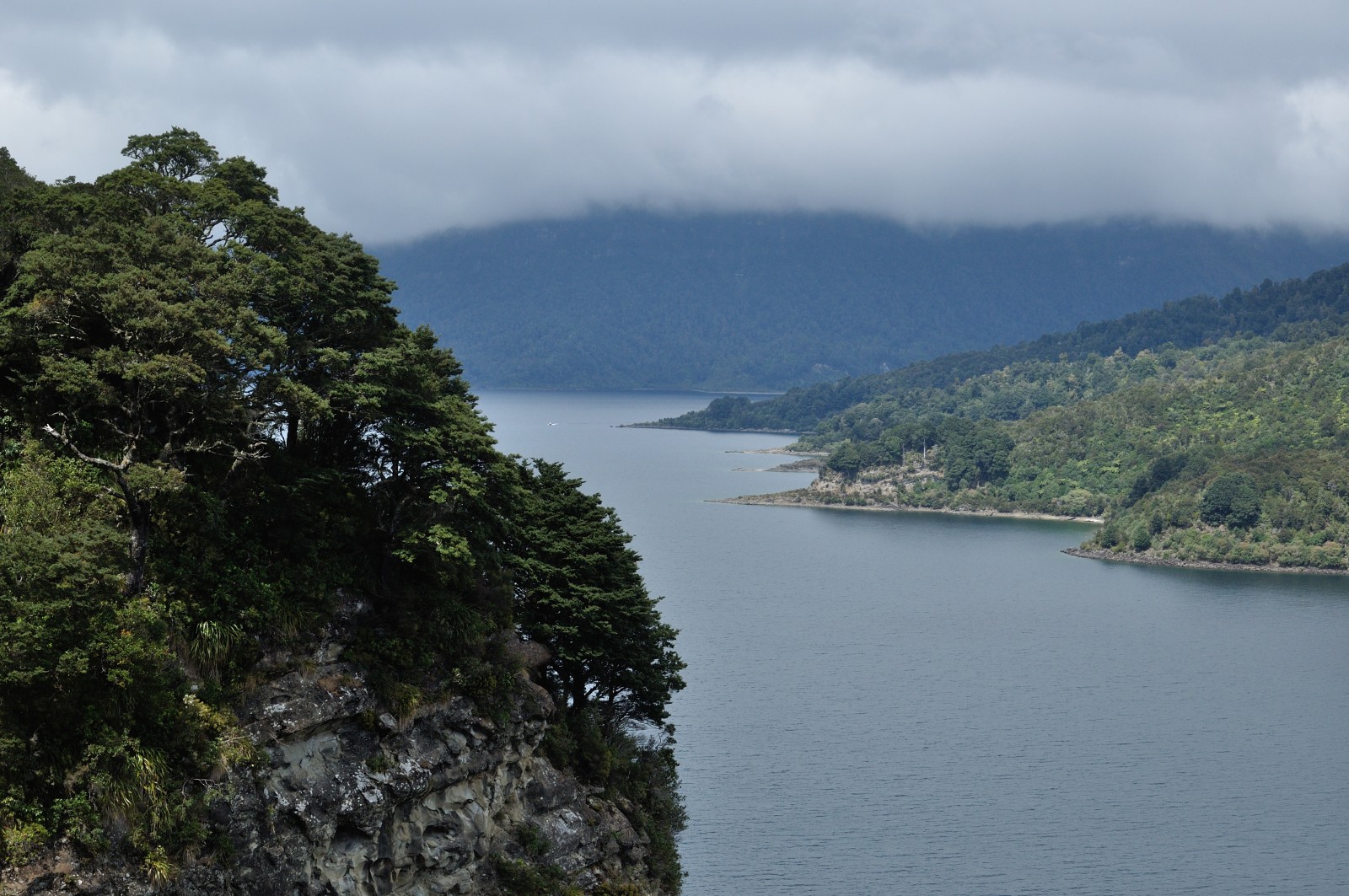 From Wairoa to Auckland

It was raining all day, we should have stayed at Wairoa but we had a tight time schedule so we kept going. We got very wet, after 40 km the road 38 became unsealed and it was muddy. Then the road ascent. We found a holiday park next to the road called “The Bush”, it was very quiet there and we got surprised when the owner said we don’t need to pay, camping is for free, but no hot shower. From the Big Bush we cycled to Mokau. We came through the Te Urewera National Park and cycled along the Lake Waikaremoana. The landscape is very beautiful and it was quiet, not many cars or tourists coming here. From Mokau we went to Mimiha Campsite. The weather turned better, we had no more rain. We climbed over 900 m high. Here we got a fantastic view over the lake and rain forest. When I experienced this view I thought the North Island is very exciting as well. After the summit the road became dusty with more loose stones. Yen cycled slowly she is afraid of the loose gravel. We passed only small settlements where Maori living. The stock and horses are free, they wandering on the road. On the next day on the way to Murupara we reached the sealed road again. We came out of the rain forest and were surrounded by farmland. At the campsite in Murupara we paid only 15 $ together and got vegetables from their garden for free.

From Murupara we went on Highway 38 to Lake Okaro, the road was busy with logging trucks. It was gentle uphill. I was behind Yen and watched my back mirror and said often “Truck coming” and then we left the road and wait till the truck passed by. At Lake Okaro is a place where caravan can stay for free overnight, tents are not allowed. We didn’t mind this rule, there is a lawn and toilets so we camped there with our tent. From Lake Okaro we went to Lake Okakuri. We followed a cycle trail in the beginning but it became to difficult and we took the Highway instead. We made a detour to visit the Kerosene Creek. A creek that heat up by hot springs, there is also a swimming hole where we took a bath, the water was hot, but not burning hot. After the Kerosene Creek we visited the Mud Pool. This area is very active and you see explosions of mud fountains. Here we met two other touring cyclist, one from France and another from England. It was a hot day, we went till the end of the cycle trail and looked for a campsite. We’ve found a very hidden one in the forest.

On the next day we took a connector ride to reach the Waikato River Trail. The connector ride was very difficult our book mentioned two hours for this ride but it took us 4 h. The road was thick gravel and often steep. We came out at the Ohakuri Dam and reached the sealed road again. Dusk was approaching when we cycled on the Waikato River Trail, we wanted to reach Dunpoint Reserve. But it was late and we camped on a field next to the trail. We ate boiled corn for dinner that I picked before from a field, we didn’t had something else to eat. Only a little bit oats for breakfast left. The next day we were very happy to found a supermarket. We came till Mangakino, that was only 32 km for today. But the trail is very difficult to ride. We watched a water ski race at Mangakino and decided to camp in the park by the boat ramp. Another couple traveling on push bikes as well arrived. When I saw them I said to Yen “Look our Doppelgaenger are here”. They also intent to camp at Lake Maraetai. We joined them and came into an interesting conversation. The names of our Doppelgaenger are J and Yoki, J is from the USA and Yoki from Japan. They look similar too us and do the same way of travelling that’s why we call them our Doppelgaenger (Doppelgaenger is one of a few German words that is used in English). J and Yoki cycled through Japan together and did Work&Travel in Melbourne.

We had breakfast with our Doppelgaenger, it was very interesting to hear more about their bike travel in Japan because after Taiwan I want to go to Japan. We took a group picture. It was not easy to say goodbye to them. Yen and me decided to leave the Waikato River Trail and take the road instead. The road to Arapuni was quiet but hilly. We camped at Arapuni Landing. The next day we started early to arrive at lunch in Cambridge and to have a rest there. But Yen was very slow today, she said cycling is very difficult today. After half way when we had a rest I found what slows her down. Her brake on the back wheel dragged. I couldn’t adjust the brake because a plastic ring that keeps the distance was broken. Yen needed a new brake. I dismount the brake on the back. Till Cambridge she had to rely on her front brake. In Cambridge we checked in at the Kiwi holiday park and then we went to a bike shop and bought a new brake for 25 $. We were tired and didn’t get the rest we were looking for so we decided to have a rest day tomorrow. In February we had only two rest days.

From Cambridge we went via side roads to Matamata. We cycled over the “French Pass” (200 m high) and took the Buckland Road. We passed Hobbiton, but we had only a rest where the visitors arrive. We didn’t visit the movie set because we didn’t want to pay 75 $ entry fee. Many tourists were there. In Matamata we looked around for a place to camp, there is no official campsite. We ended up in the rugby stadion in the middle of the town. I asked before and the manager was agreed. In the night we got a visitor. A police man woke us up and asked our names. He didn’t said anything about the wild camping, he said it’s safe here and let us sleep. We planed a long ride for today, we wanted to reach the magic 100 km mark. We cycled 40 km without a break till Te Aroha. Here we had a long break in a beautiful park. We were sitting on a big swing and enjoy the view. Then we went on the Hauraki Rail Trail for 15 km, it was thick gravel and slow us down. We left the trail and cycled on a straight road. The last 5 km till Ngatea we had to take Highway 2. When we arrived in Ngatea we did 87 km. We went to a swimming pool where a school class had swimming lesson. The teacher let us in to have a free shower. We camped in a small park behind the library with other travellers. The German couple that we met yesterday in Matamata told us about the free campspot.

Finally we could ride a whole day without ascent. The road from Ngatea to Kaiaua was totally flat. We cycled along Firth of Thames when we got haunted by a thunderstorm. There was no shelter we got wet. In the afternoon the rain stopped and sky cleared. In Kaiaua we camped by the boat ramp, it was noisy, because all night long people came to put their boat in the water to go fishing. In the morning we saw a beautiful sunrise that reimbursed for the uncomfortable night. We did a short ride today, we were close to Auckland and decided to spent the day in the Tapapakanga Regional Park. To book a campsite a had to made a phone call to the park hotline. The park is beautiful situated by the beach. We had a great view from our tent. It was the last day of February and I was happy that I could relax at the beach and didn’t had to be worry about to arrive in time in Auckland.

On the 01th March we reached the suburb of Auckland and stayed in the holiday park in Manukau. We stayed for two nights there. The next day we cycled into the city center. It was a long way from Manukau over 20 km and we saw mostly industrial area. In the center we went up Mt Eden and had a great view over the city. When we were standing on the top I had the feeling “we made it”. We cycled all the way 3300 km from Christchurch to Auckland and saw so much of this beautiful country. I was so happy. We went down to the ferry pier. The Queen Street was full of people from every nation. We took the train back to the campsite. On the 03th March we cycled to the airport. Yen still got her bike. We planed to sell it in Auckland but it was hard for her to leave it behind (however she has a much better bike at home). We stopped at a viewing point where you can see the runway and saw an A380 landing – what a huge plane. This time I didn’t looked for a bike box in advance, I was thinking there will be other cyclists arriving in Auckland leaving their boxes behind and I can grab them. However 2 km before the terminal I saw a bike rental and grabbed a box there for free. I sold Yen’s bike in front of the terminal when she went to the toilet. I spotted three people coming out with two bikes and I asked them if they need one more and indeed there were looking for a third bike and bought Yen’s bike for 50 $. Before we came to New Zealand we already planed to leave her bike here because she got a good bike in Taiwan and this one is worn out and not worth to pay the extra luggage fee. We slept the night in the terminal and took our plane in the early morning back to Australia.