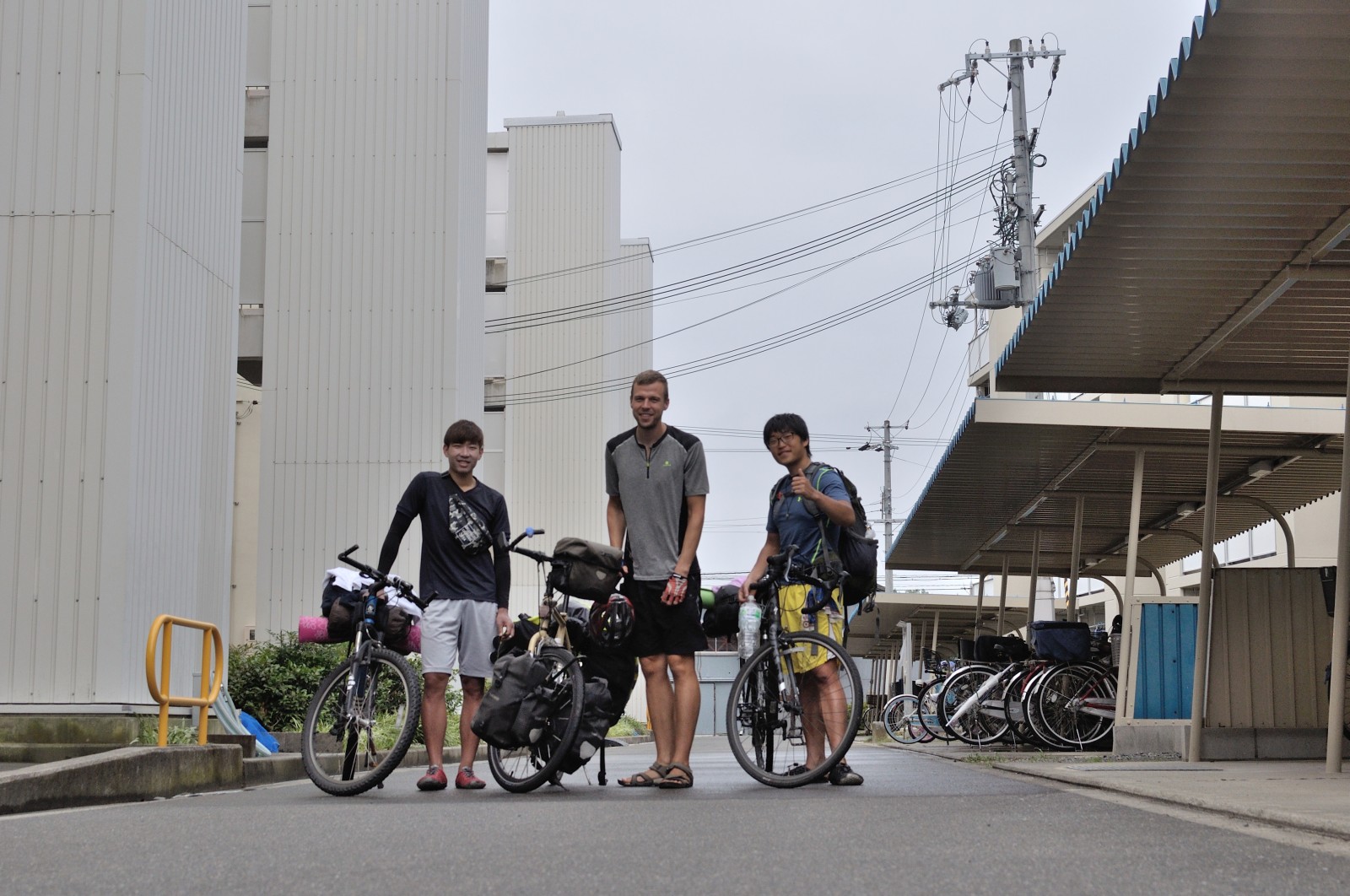 From Shodoshima Island I took the ferry to Himeji. I went to the famous castle. At the entry of Himeji Castle I’ve met two Korean bike traveler. We stopped and talked. Her names are Min and Chan, they both together carrying less luggage than me. They want to go from Fukuoka to Hokkaido in 4 to 5 weeks only. We made a meeting point on an offical campground by the beach. I went around the castle, but I didn’t went inside. When I arrived at campground there was nobody. I saw a price list and was thinking thats too expensive, the Koreans must be at another place. I drove to public park close by and here I met Min and Chan again and was very happy. We camped together by the sea.

It was my first time I hang out longer with Koreans. Min have been to Germany already and cycled the USA. He read the printing “Radreisender” correctly on my bike and said that means bike traveler. Wow, I was amazed (he had German lessons). Both speaking English very well. We had essential discussion which Asian country has to the most beautiful women. They told me I will like Korean girls. They do a lot of double eyelid surgery. I didn’t know about it. They showed me the difference on themselves, Chan hast the double eyelid and Min the single eyelid (slit eye). Also new for me was that your’re one year old when you’re born in Korea. Min had a funny story to tell, he was in Berlin as an exchange student. He wanted to buy the vodka but he couldn’t, he was 17 years old in Germany but 18 in South Korea. Both did their military service. Chan in military police and Min in the police. Min told me as a police man on a demonstration he was only allowed to defend himself and fight against the protester only as last way. They described the military/police service as boring, you’re have to stay at the barracks and not allowed to go out and have only a few days off. As a result they lost her girlfriends and start excessively smoking and drinking.

On the next day we all wanted to go to Osaka. The Koreans had a place to stay already, they contacted their warmshower host if I can stay as well. The host answered yes. So went all together to Osaka. It was a hot day and we cycled Highway 2 through a large metropolitan area. We had to stop a lot because of the traffic lights. When we arrived after 90 km at our hos in Osaka I was exhausted. I’ve learned a new expression, Art (the name of our host) said about me “He is vegetable”. Art speaks English, Spanish, Portuguese, Japanese, German and French. He studied languages and works as an English teacher. I like him, he was a good mate. When we wanted stay one night longer, he just said “no problem”. We took a rest at his home, a small flat. I didn’t went out to see Osaka, it was too hot for me.

I decided to go with the Koreans till Kyoto, then we will split up. In Kyoto I didn’t felt well, I just wanted to get out of the city. I went to Lake Biwa, the biggest lake of Japan. Here I found a quiet campsite. On the next morning I got invited by a Japanese women to be guest at her house, she cooked for me and let me watch her favorite show “Why do you come to Japan” later that day I cycled along Lake Biwa. I didn’t surround the lake, from Hikone I went to Gifu. Here I thought about to cross the alps but I went North around Nagoya and turned back to the coast via Toyota, Okazaki, Toyohashi and found a place to camp at Hamamatsu, I followed Highway 1 which it’s not allowed for bicycles at some stage but there are sideroads which I took.

From the city Fuji I went closer to Mt Fuji, I had a steep climb (over 900 m altitude) but I couldn’t see Mt Fuji, because it was cloudy. Sometimes the road disappears in the fog. I’ve met a swiss couple cycling in the direction where I came from. We stopped and had a chat. I preferred to talk English to them instead of German. It was easier for me, it would take more time till I get the German word in my mind. Close to Gotemba I found park to camp. When I looked up the sky on the next morning I saw a lot of blue wholes. I cycled back to Gotemba I wanted to see Mt Fuji but the mountain was still covered in clouds. Then I’ve read Kenta’s mail, he wrote I should better come today to his home in Tokorozawa (a suburb of Tokyo) because tomorrow he will be away. That’s over 100 km, a very long distance for me to do in one day. I cycled via Matsuda, Atsugi, Hachioji, passing by Lake Sayama and Lake Tama and arriving at my daily destination Kotesashi. I’ve reached his home after 113 km. When I saw Kenta I was so happy and forgot all the strain. We’ve met more than two and a half year ago in Iran. He is the first Japanese person I’ve met and he is also a bike traveler.