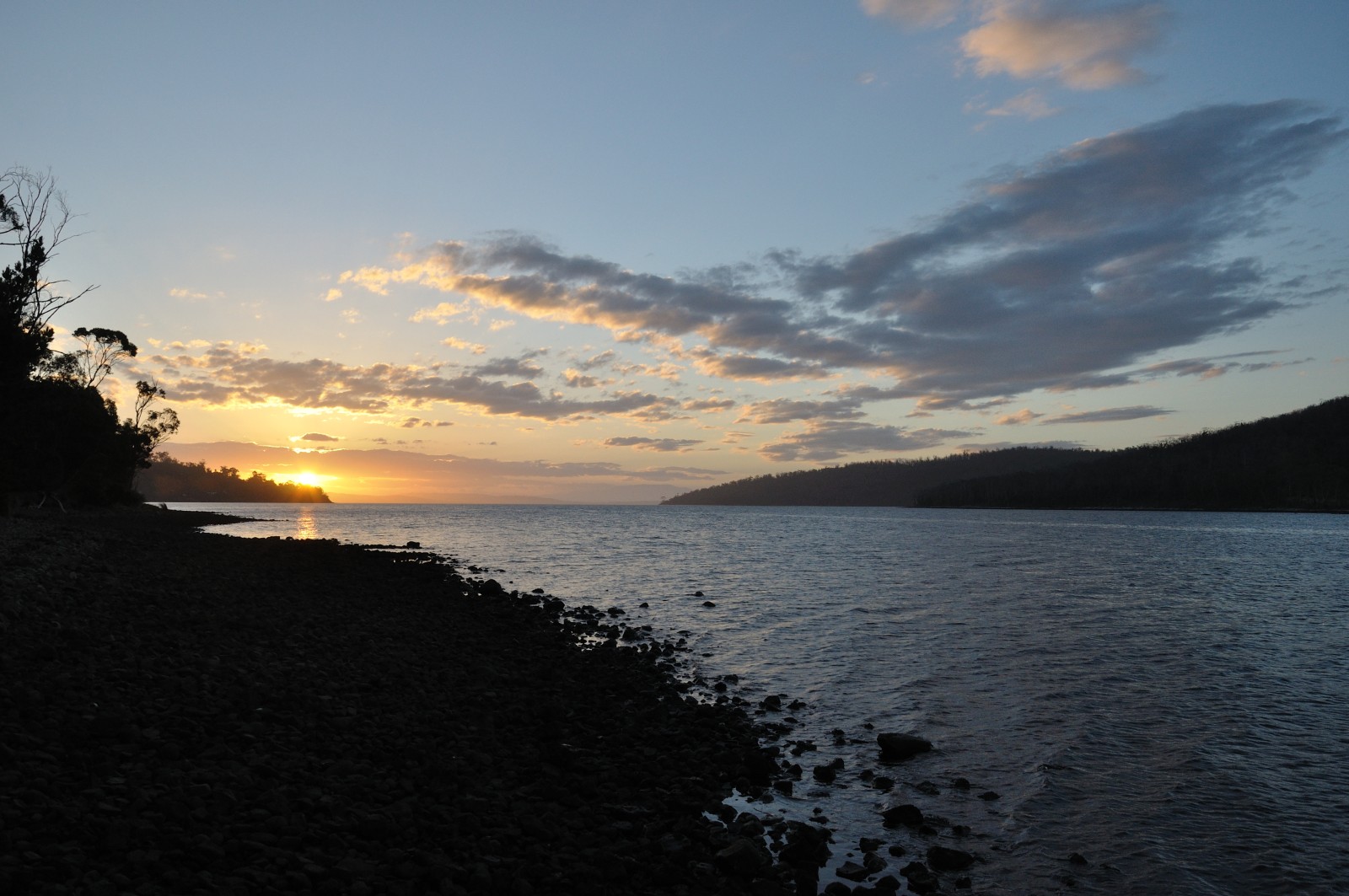 After I cycled with Yen to Bruny Island and Hasting Caves we wanted to work again, but we didn’t found a job (they are to many backpackers in Tasmania and not so much work). So we decided to go on a cycle trip again. Our destination was the Tasman Peninsula and then come back to Hobart. We started from our camp in Huonville like on our trips before. The first day we cycled over a 500 m hill to Kingston and camped in a park close to the beach where I have been before with Alex.

On the next day when we cycled through Hobart Yen wasn’t sure if she wants to cycle further anymore, because she was scared by the heavy traffic that we passed. Okay it was my fault I shouldn’t cycle on the mainroad with her. I’m used to cycle on the road with much traffic but for Yen is still an uncomfortable situation. Then I let her choose the way. She did a much better job for the navigation and we had a nice way to Seven Mile Beach. We camped in the dunes at the beach close to the approach path of the Hobart Airport.

While we had a break in Sorell on the next day, we met another cyclist. His name is Alex, he is from Germany and started his trip a couple of days ago. He is riding on a bamboo bike which he build by himself on a workshop in Berlin, well done. Yen and me were going to Carlton this day. Here we could take shower at the surf club, our first one since we left Huonville. From Carlton we reached the Tasman Peninsula on the next day. Here we found nice places to camp.

At the Lime Bay we had a rest day. This campsite is home for many opossum, after sunset they came through the camp in search of food. They are not shy and jump direct on you dinner plate, not easy to deal with these big rats. We even saw a wallaby fighting with an opossum. We did a nice walk through the Blue Lagoon which was dry out. On the way back to the camp we got nearly lost in the bush. We didn’t went to the historic site of Port Arthur, we had to go back to Hobart.

We did the way from Lime Bay to Hobart in two days only. On the last day we did 70 km and it was quite hilly. In the end of the day we had to climb on Mt Stuart where we stayed at Jen. I’m surprised that Yen didn’t complained. But we had a deal who will complain has to buy an ice cream for the other one (so I bought here one because I complained a lot). Jennifer did us big favor and hosted our cycles while we were going around with Yens car for a week and she managed also that we didn’t had to cycle to the airport. I left Tasmania on the 22th March and flew back to Brisbane. Yen flew one day later back to Taiwan where we will see us probably again in August or September.